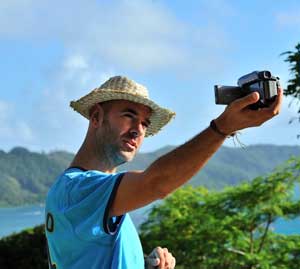 Julian McDonnell is a director and presenter of documentaries based in London. His first film “My Evil Trade - A Pedlar’s Life” was instrumental in helping to block legislation which would have turned all pedlars (a lawful trade in the UK) into criminals.

The success of this documentary led to him being asked to make an environmental awareness film on the uninhabited Phoenix Islands in the Pacific, on his way to filming “Take Me To Pitcairn”.

He speaks French and Italian and, after getting his degree in Philosophy at Manchester University, Julian spent fifteen years working as an actor in London whilst also performing stand-up comedy on the London circuit and presenting on a local radio station, Riverside FM.

However his passion has always been presenting and directing and he soon seized his opportunity when advancements in technology made film-making accessible to people on lower budgets. Having worked on many film sets before, he is no stranger to the camera and his ability to put complete strangers at ease enables him to capture the true personalities of those he films.

His style of presenting is friendly and humorous and he doesn't shy away from making a fool of himself if necessary.